What You Need For Smooth Cummins Swaps

Cummins swaps are a popular kind of engine swap, primarily because the Cummins 6BT engine is lauded as the best diesel engine. If your vehicle is slightly underpowered for today, a Cummins engine swap is an enticing idea. Engine swaps became popular in the late 80s and beyond because they allow you to receive the perks of a certain engine by placing it in a vehicle that had a different engine.

The Cummins 6BT engine was introduced in 1984, originally for agricultural applications. Five years later the Cummins 6BT was offered in Dodge pickup trucks after a deal between Cummins and Chrysler was forged. Soon after being introduced, the engine became incredibly popular for its ability to increase torque at low speeds which provided a fuel economy increase, especially when towing.

To have a successful Cummins engine swap, you will need the right equipment. Eras of certain engine models have specific requirements, so your equipment will depend on this. Here are the pieces of equipment, to get you through your engine swap journey:

Cummins swap mounts are used for properly placing your engine to the OEM frame mount isolators. Swap mounts are able to withstand the torque and stress of your drivetrain. Some swap mounts, like the Chevy Cummins Motor Mounts, have compatibility for both 2WD and 4WD vehicles. Swap mounts also isolate vibrations from the engine, and they usually have a design of two metal pieces joined together with a rubber insulator between them. 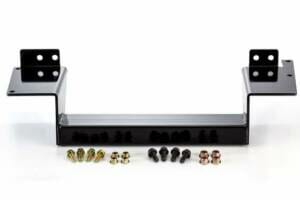 Performing a Cummins swap without having an adapter kit would make the experience a lot more challenging, so make your swap easier with a swap kit. Since a limited number of companies have entire Cummins swap kits available, the price can be daunting. However, you’ll see the value in the amount of time, errors, and frustration you will avoid by having a kit.

Ford to Cummins Swaps are very popular. Drivers love having the opportunity to match a luxurious interior of a Ford truck with a superior engine to the 6.0 Powerstroke. When it comes to swap capability of Cummins engines to Fords, the 12 valve Cummins is the most simple, but the 24V Cummins engines have more power and therefore more electronics.

Where to Get Equipment

To get the right equipment for your Cummins swap, finding the right provider of these pieces of equipment is up next. Look for a manufacturer that has the correct compatible parts for your Cummins swap. Once you find the manufacturer that has the experience with these specific parts, that will make your swap experience as easy as possible. Make the purchase and get your swap started today!